If anyone’s been following the Vic Mignogna situation, they’ve heard about what’s going on with Pensacon. Before Pensacon deleted their twitter account, they’ve caused a lot of controversy. Mainly due to #IStandwithVic. You see, Monica Rial is going to attend Pensacon 2019. As we all know, Monica was one of the many who have allegations of sexual assault and harassment against Vic. It’s so bad that there’s a meme out with Bulma (whom she plays in the Dragon Ball Super English dub) yelling Monica’s most famous response on twitter at a computer screen. 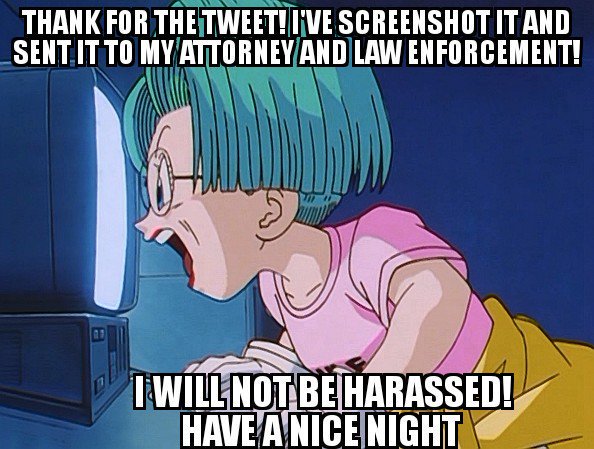 She has been using that reply with everyone, including those who weren’t really harassing her. I’m not saying she’s not being harassed, I’m impartial on the Vic situation. There are some people actually harassing her, despite Vic’s pleas for people to not hatefully attack anyone on his behalf. But… I’m not impartial when it comes to fascism.

So far they claim that anyone who wears a “#IStandwithVic” shirt or openly supports Vic in general will be removed from the convention by law enforcement.

Against the convention and that’s why the owner made threats towards us. He kept repeating himself when answering questions acting like we were mobbing the place? We were going to peacefully be across the street. Now Mike is making up lies to fit his narrative. #IStandWithVic pic.twitter.com/02ndDVM1iC

Anywho, Pensacon has been using threats of law enforcement to try to quiet down the Vic supporters. It all started when they found a tweet from an anime fan who didn’t even tag them in their tweet that was asking if some of their followers were going. However… this isn’t the only thing going on. Right now, there’s something even more serious.

So Pensacola received this, what definitely appears to be a bomb threat. I’m told Homeland Security is investigating this, and that’s great, but I’m sharing this shit. I’m not sure if this is genuine or not, but depriving con goers of this info is irresponsible as hell.

Ethan Van Sciver, the host of the popular YouTube Channel ComicArtistPro Secrets found out about a bomb threat towards Pensacon. People, unlike those protesting due to Pensacon wanting to kick Vic supporters by “booing” Monica Rial, THIS IS SERIOUS. Some are claiming that it’s a hoax done by Pensacon runner Mike Ensly. Others are blaming overzealous Vic Mignogna fans. However… bomb threats are not the way to go. As I keep pointing out, I don’t side with Vic or Monica and Jamie on the Anime Gate situation. But I am shocked that this even happened. Though in my eyes this couldn’t have been done by a Vic supporter due to them saying “social justice warrior” instead of the shortened “SJW”, it’s still wrong. Look, bomb threats are something to be taken seriously. You never use those, serious or not. Domestic terrorism is no laughing matter. As Mr. Van Sciver tweeted later on, this needs to be taken seriously. I don’t know who you are or what side of the Vic and Monica & Jamie fence you’re on, you’re sick in the head for even making this threat.

The worst part about the bomb threat situation is that no one at Pensacon even mentioned getting the threat in the first place. If this threat is serious, then people could have been hurt or worse; dead. People could’ve died on your watch and the blood would’ve been on your hands as well, not just the bomber’s Pensacon!

Now that the bomb threat part’s out of the way, apparently Pensacon has been lying about something else.

This is both hypocritical and fascist. They say that they are not limiting Free Speech, but they are. Look, they should just get better security for the con if they’re that worried. Like be sure to get metal detectors, do stuff that would make TSA security look like a joke. Well… we know that TSA security is a joke, but that’s not the point. You guys are already making your con seem like a police state, then you might as well go the extra mile?

Look, I’m against how Pensacon’s staff are acting. I don’t think a convention is a place to force your political agenda. They already took away GeeksandGamers.com’s journalistic credentials because Jeremy did a video talking about his thoughts on the Vic situation. And they’re talking about arresting people for standing with Vic. Due to the attention, they deleted the official Pensacon twitter account.

If anyone reading this is going to that fascist con in Pensacola, Florida… please listen to my request? For the Vic Supporters, don’t do anything violent? Free speech is the First Amendment, but don’t take it too far and call Monica a liar at the top of your lungs? Please don’t resort to violence and incite fights or purposely do something with the intention of getting arrested? Please just do things peacefully? It’s okay to just “boo” Monica, ask some questions, be an average fan.  I’m not saying don’t talk about the subject, I’m just saying don’t do it out of hate. Would Vic want that?

As for the Monica supporters… I’m pretty much asking the same. It’s alright for you guys to defend Monica, but don’t do something that would normally get you arrested. Fascist or not, cons are not meant to be places of bloodshed. And this goes for both sides.

Because I didn’t pay attention earlier… I found out who sent the bomb threat to Pensacon!

My good friend on Twitter Pirate Canvas just posted a tweet. None of us ever thought to look at the bottom before. It was sent by Pensacon themselves!!! Those… oh, I’m so mad right now. Bright side, they just shot themselves in the foot. But my request to everyone from before still stands, no bloodshed please?

Someone pointed out that there’s a possibility that it was “sent by Pensacon” because they forwarded it to Ethan Van Sciver. I feel like an idiot for DMing the guy about this. Anywho, Pirate Canvas sorted it out.

Yeah sorry someone actually sent that. But I mean we’re getting on to something here.

Everyone’s been on edge about the bomb threat. Both Pirate Canvas and I didn’t not have the intention of spreading misinformation. Though Pensacon is not yet in the clear, we shouldn’t jump to accusations.