I’m done. I’m freaking done. Actually, I considered myself done the moment that Vic Mignogna lawyer’d up. In truth… this little video I made is my farewell to Weeb Wars (Formally AnimeGate).

Yeah, I made a video with the Oracle facing people on the #KickVic side in SoulCalibur VI. And before you ask, I will get back to live streaming the Libra of Souls this month. The first KickVic person is the standard Funimation dub fanboy who sides with #KickVic because most of his beloved VA’s do so. The second one represents the cosplayers who think he’s a creep and that the YouTubers are wrong about the situation, the same YouTubers who have done more research than actual “journalists” (I’m looking at you Anime News Network and i09). The third is a White Knight, the term used for guys who protect women (or whammens if you’re anti-SJW) and believe everything they say despite the lack of evidence. The forth opponent “Holmesbutt” is an obvious parody of Shane Holmberg, a con organizer who is with #KickVic who was also a guest on one of Nick Rekeita’s live streams and got destroyed on stream due to his lack of actual law knowledge. Everyone’s been making fun of him for the state his chair is in and the fact on his kitchen counter-top was a shoe on a cutting board. And lastly “Soy-Goku” is an obvious parody of Sean Schemmel (the man who voices Son Goku in the Dragonball dubs Funimation does), I copied and pasted an actual tweet he did. I still can’t believe that the man who voiced a character I loved as a kid is such a diva, never meet your heroes people.

The video is an alternate one I made for a friend on twitter, Pirate Canvas. In that version, it’s his OC (or should I call her his mascot?) Molly-Chan facing the #KickVic crowd. They haven’t uploaded it yet, and please don’t bother them to do so? Pirate is a guy who does both art and music commissions, I’d hire him to do some art for my novels if I could afford it. And yes, the song used in the video is one of Pirate’s, this one is “Dread Ops”. I was given permission to use it in both videos. And if you’re interested, he’s live streaming on twitch at 10:00 pm EST tonight. I may or may not be on the stream, it depends. And yes, he streams his art in progress drawing it for everyone to see. At least that’s what he did on his last stream. If you’re interested, I’ll tweet a link around the time it starts.

Now to stop talking about the video. The real reason I’m out is due to the fact that I have gotten worse about getting any writing on my novels done since the Vic Migogna situation began. The most I’ve done was blog about the situation, made a few gifs, and a meme… 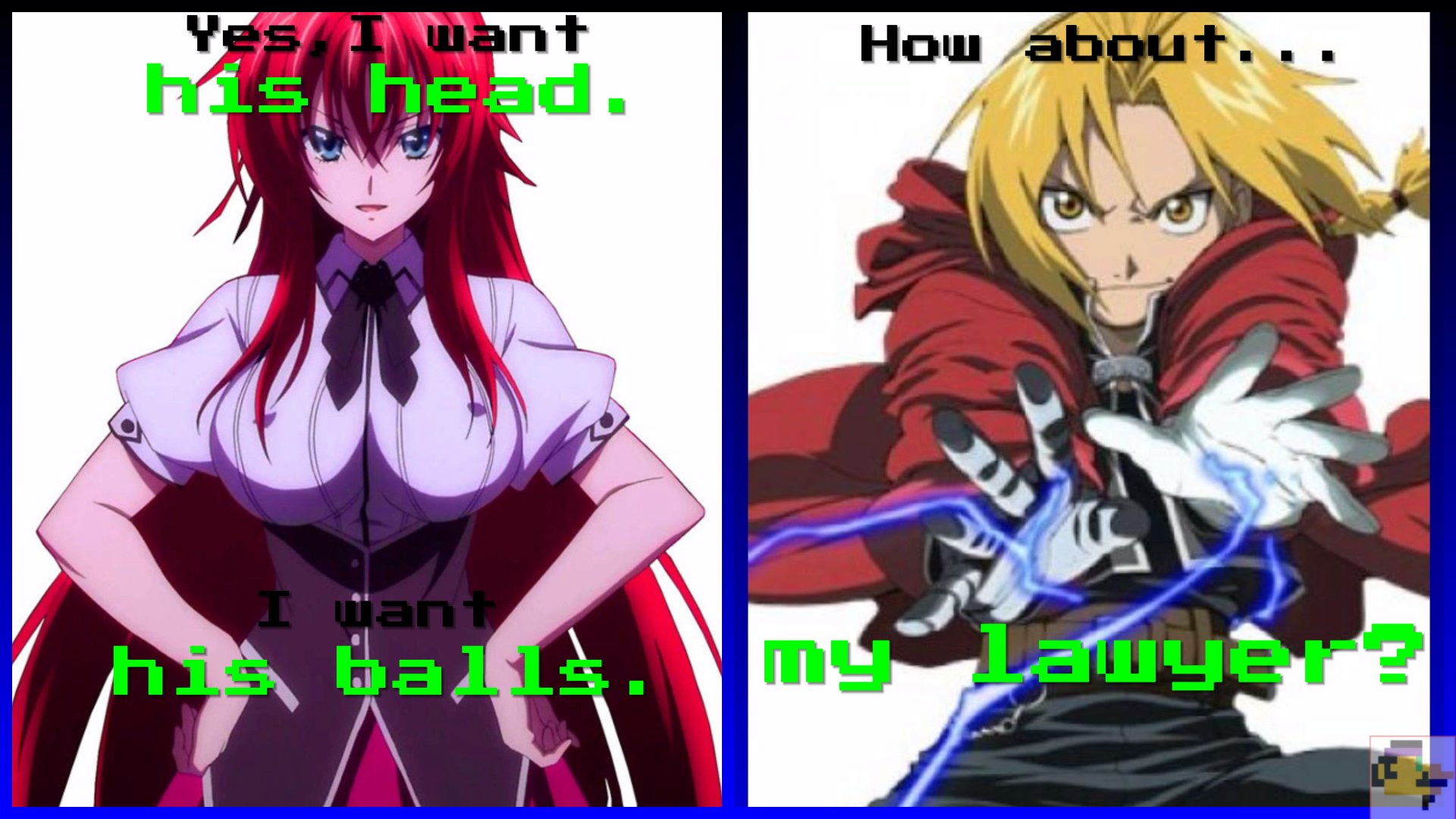 This is based on one of Jamie Marchi’s tweets about wanting Vic’s head and balls. I made it around the time that Vic lawyer’d up. The character on the left is Rias Gremory from High School DxD, whom Jamie voiced in the English dub. On the right is Edward Elric from Full Metal Alchemist, voiced by Vic in the English dub (and one of his most popular characters to date). I mainly chose the characters due to status when it comes for what the voice actors are known for. However, there was a double meaning that wasn’t intended. If you read or watch High School DxD, you would know that Rias is a devil. And if you read or watch Full Metal Alchemist, you would know that Ed is a self-made man (sort of, due to his age) who made a big mistake in his past. So yeah, that wasn’t intended.

My point, I’m getting out of it. Not 100%, just not going to be as involved as I was a month ago. I helped both Pirate Canvas and Super Girl investigating the situation in the past. I even had an alt twitter account (that I plan on taking down soon) to view what the #KickVic side was up to (I didn’t even talk to some of these guys and got blocked for having friends in #IStandWithVic). To be honest, I’m just tired.

I’ve defended some of the cosplayers that were being called out (some of them blocked me later due to my connections with the other side), I’ve tried to remind people that Vic doesn’t want us to attack anyone hatefully on his behalf, I’ve even tried to tell people that Dominique Skye (a cosplayer whom I didn’t defend at all) is just trolling people and that she doesn’t work for Funimation at all. I had a screenshot of one of Jamie McGonnigle’s tweets that I took from the alt account accidentally stolen by someone for a YouTuber and got zero credit. Don’t worry, me and the YouTuber are cool now due to the fact that the person who sent it to him didn’t mention me at all. It wasn’t the YouTuber’s fault. I regret going on a rage in the video’s comments about it being stolen in the first place. The person who sent it to them tweeted that it me who found the tweet in the first place. Though I don’t think they ever put that it was me who found it in the vid’s description or anything… I just checked it, SGSAMI never corrected it at all. Don’t mind it, I’d only look like a whinny bastard if I try to call him out again.

The point is that I should be using my time to work on my novels. I need to get back to what makes me happy. I like to write fictional materials, not rant or report news. I’m going to leave it to the YouTubers such as Yellow Flash, Hero Hei, That Umbrella Guy, Nick Rekeita, SENPAiSHOME, SGSAMI, The Casual Otaku, Unreal Network, EmoshisLive, and my friend Super Girl who is the newest on the scene. I’m proud of her for finally showing of her findings for herself instead of waiting for the other guys on the scene to reveal what she’s given them. But yeah, I’m going to leave it to them. I’ll watch their vids, share their tweets, and even attend their live streams when I got time. But that’s about it, I’m done doing the research. I’ve actually been done a while ago. Since Vic has Ty Beard (the head of a good Texas-based law firm that specializes in litigation), I don’t need to do anything. Let the courts decide if Vic’s innocent. Let Funimation and Rooster Teeth deal with the aftermath from when this goes to court. Let the accusers look like fools for making such claims with nothing to back them up. Hey, I do believe victims. But I believe in evidence even more.

And now changing topic, it was my birthday on the 12th. I didn’t do my normal birthday post because I felt a little… you know. First, my sister Michelle got sick so she never came over. Second, the BMV (Bureau of of Motor Vehicles) in Barborton increased the price of renewing the plates for my truck. So yeah, I already wasn’t having a 100% good birthday. The bake and serve pizzas I wanted for my birthday dinner got burnt as well. And yes, no cake. But overall… I can’t say it’s the worst birthday I’ve ever had. Oh yeah… the last issue was triggering this MGSV cutscene:

I didn’t log-in in time to get it, so I had to change the timezone on my PS4 to trigger it. If you log in on your character’s birthday, you get this cutscene. You set that birthday when you create your character (I think) in the beginning of The Phantom Pain. But yeah, this was the last of my birthday woes. I had all kinds of friends and family on both Twitter and Facebook wish me a happy birthday. Even my sister who didn’t show up made me one of her famous birthday collages on Facebook. Trust me, the good still outweighed the bad. So yeah, it wasn’t a bad birthday.